The NDP and Equivalencies

A few days ago I tweeted about speed limits on the Sherwood Park freeway. Part of the freeway is legally provincial highway 100, but there are no signs indicating this. On my website and social media I referred to the uns 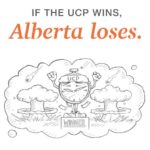 igned highway as “secret”. The NDP and their twitter fellow travelers went berserk. I received large amounts of faux outrage for equating “unsigned” with “secret”. Meanwhile, the NDP sent out a fund raising email that equated electing a UCP government with nuclear war. The Notley government anger machine seems to think electing a conservative government is equivalent to the death of millions of people in a global war.