THE VALUE OF LEADERSHIP

One hundred years ago today the First World War began. Many historians view the cause of the war as the competition between national interests in Europe. While national ambitions may have provided background, I believe the war was a failure of the political leadership of the great powers of the world. One of the lessons that should be learned from the start of the war is the value of competent leadership. 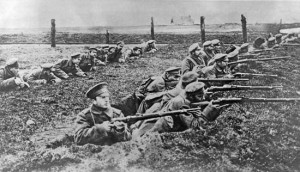 t peace and no nation had a leader actively seeking a war. The immediate cause of the war was not planned aggression. The immediate cause was the assassination of Francis Ferdinand, the heir to the throne of Austria, by a Serbian national. The assassination precipitated a crisis that the leaders of Europe could not manage. The Austrians blamed Serbia. Russia stood by Serbia, a fellow Slavic nation and client state. Germany stood by its alliance with Austria. France stood by its ally Russia. German war plans were structured to get the jump on France should war commence. Those same war plans involved an invasion of France through neutral Belgium, whose neutrality was guaranteed by Great Britain. At that time a British declaration of war brought Canada into the war. Sixty thousand Canadians died.

Most of us can name the leaders of the warring nations in the Second World War. Churchill, Roosevelt, Stalin, Hitler and Mussolini are all historically significant and played dominant roles throughout the war. Contrast that with the leaders of the warring nations in 1914. Who remembers their names? By the time the war ended four years later, the leaders at the beginning were all out of office or overthrown. There was a compete vacuum of competent leadership and it resulted in what was up until then the most destructive war ever.

One hundred years after the start of the First World War, the world faces a number of crises. Gaza and the Ukraine top the list. To that list can be added Iraq, Afghanistan, and North Korea and others. None of these crises seem serious enough to lead to a general war. However, they are all more dangerous than the assassination of Francis Ferdinand.

Canada is a democracy. We choose our leaders. Historically we have chosen well. From Macdonald to Borden to Mackenzie King to Pearson to Steven Harper, we have been led by people with skill and vision on the world stage. Canada is a nation that has a reputation for contributing to the peaceful resolution of disputes. We often do this by counselling compromise. Other times we reaffirm our commitment to shared values. Sometimes both.

Every time we are called upon to cast a ballot and choose a leader we should ask ourselves which leader has policies that promote peace and oppose conflict and terror. We should ask which leader understands the world and can contribute to solving the crises that frequently confront the world. For our children and grandchildren I pray that we always choose well.